A History of Sugar Grove Cemetery

The Sugar Grove Cemetery Association was formed in 1857 by a group of civic-minded Clinton Countians who saw the pressing need to develop a centralized location for burying the dead – a place that essentially would eliminate the nearly 100 small, often neglected burial sites scattered throughout the county in churchyards, backyards, barnyards, hillsides, cornfields, and woodsy coves. 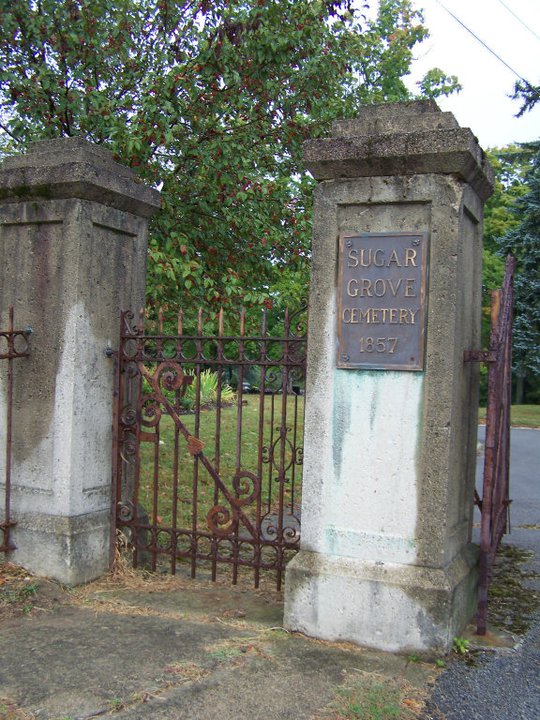 The Association bought 23 acres on the west side of Wilmington and hired nurseryman Leo Weltz, a 33-year-old Prussian-born landscape gardener, to lay out a cemetery on the pretty piece of land. He started his work on March 5, 1858, and just a few months later the rugged, big-hearted German with an encyclopedic knowledge of horticulture unveiled Sugar Grove, with its hundreds of varieties of trees and plants, gracefully winding drives, and wide grassy spaces. Those who entered the peaceful, lush, welcoming grounds felt the full effect of Mr. Weltz’s philosophy of design. There is no melancholy in nature.

Sugar Grove Cemetery was dedicated on August 28, 1858, and in years since has become a community unto itself.There have been more than 14,800 interments including 1,643-plus veterans; special areas have been formally designated for Civil War soldiers, children, charity cases, and pets; mausoleums have been built; a monument to the veterans of all wars has been erected; and 94 additional acres have been purchased for lots.Sugar Grove resonates with the varied stories of its residents, and with the vision of a remarkable man who transplanted the aesthetics the of European royal gardens to Wilmington, Ohio.

Leopold Weltz was born in Prussia on January 17, 1825, the son of Frederich Weltz, a botany professor and geologist who worked for the Prussian government. Frederich supervised his son’s education through the elementary grades, and helped to develop the boy’s passion for horticulture.Leo later attended Osterwick College and Magdeburg College. Subsequently, he went to the University of Heidelberg, where he majored in horticulture and landscape gardening. He helped design the Botanical Garden a the university, and later moved to Berlin to work at the Imperial Botanical Garden of the court of King Wilhelm. Leo was employed there for two years, and then advanced to the highlight of his European career: a job as head gardener to Czar of Russia, Alexander III.

Leo worked for the Russian imperial court for nearly four years, and then was called back to Germany for military service. He was made a Lieutenant in the infantry and fought in the Revolution of 1847. He was decorated for valor, receiving four medals for meritorious conduct during his five years of service. One of the medals was for the courage he demonstrated while capturing a battery of guns. At a special ceremony in Germany, King Wilhelm pinned the medal on Leo’s uniform. The medal came with a pension, but Leo never claimed it.

When his military service came to an end, he went home to Magdeburg for a short time to supervise the gardens there. In 1851, Leo left Germany to come to the United States. He settled first in Huntington, in what is now West Virginia. A year later, he sailed down the Ohio River to Cincinnati where he took a job at the William E. Mears nursery in Mt. Washington.

In 1855, Leo Weltz started his own nursery business and soon took on some impressive landscaping jobs, designing the grounds for the home of . Salmon P. Chase and other large estates in the area. Three years later, he was at work on Sugar Grove. When it was finished, he moved on to lay out cemeteries in the nearby communities of Martinsville, Hillsboro, Springfield, London, and Corwin, where Miami Cemetery is located.

Leo established a nursery in Wilmington in 1859, on land where Peterson Place now stands. In 1860, he moved here with his wife, the former Elizabeth Anna Schwalenberger, who had emigrated to Cincinnati from Alsace-Lorraine with her family in 1841. Leo and Anna had seven sons, six of whom grew up in Wilmington: Fedor, Trebor, Otto, Frederick, Fremont, and Leo. The youngest son, Charles William, was deceased. Some of Leo’s sons went into business with their father, sharing his passion for horticulture and landscape design.

Though many of the trees Leo Weltz planted at Sugar Grove have succumbed to age or disease, some of the originals still stand, including domestic types such as the sugar maples that inspired the cemetery’s name, other maple varieties, oaks, beech trees, hickories, and assorted evergreens. Among the types that Leo Weltz imported were a Chinese chestnut, an amur cork tree, a cucumber magnolia, and a bald cypress.

An overview of the cemetery reveals the expansion of the original 23 acres to the present 47, and shows the butterfly-shaped pattern of the drives – curved sections surrounded by an outer rim. Grave sites near the borders of Sugar Grove benefit from geography: there’s an additional stillness there which for some, perhaps, is fitting. 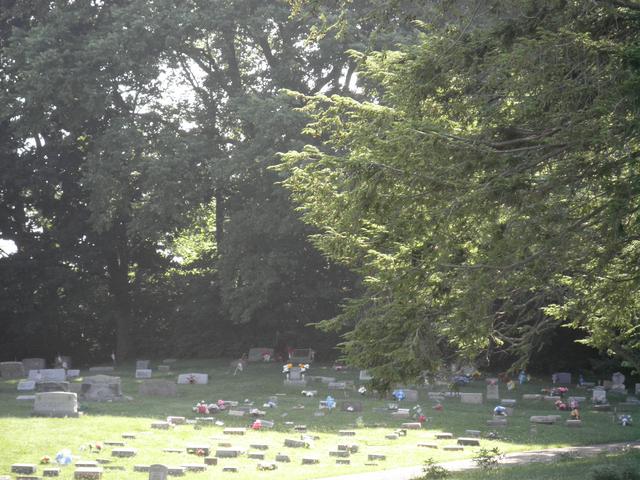 The Children’s Cemetery, also known as Baby land, was established in 1937 on the easternmost edge of Sugar Grove. There are more no more lots for sale; the last burial was in 2004. In every season, cheery decorations, flowers and toys adorn many of the 290 little headstones, some topped with lambs or angels.

To the north, on land adjoining the former Pennsylvania Railroad, are the graves of some who traveled from far away and made Clinton County their home. Along one ridge are several thick, boxy tombstones with Irish surnames and Celtic symbols. Some bear the names of home counties in Ireland; a few are carved with scripture, one with poetry.

West of these are graves of people who came from places unknown and died in Clinton County. The Charity Section, originally known as Potter’s Field, was established in the 1860s to give a final resting place to transients and those with no known family from the Clinton County Infirmary. Many of these stones have only numbers listed with the corresponding names and dates of burial kept in the cemetery records.

The smallest section of Sugar Grove is the Pet Cemetery, which was established in 1973. It now has 144 residents: 108 dogs, 30 cats, 5 creatures of un-designated species, and a skunk. Presently, there are not more lots available; however, the board is currently reconsidering opening more lots to meet the ever-growing need for pet-lovers in our community.

The earliest burials in Sugar Grove were in the interior sections west of the cemetery entrance. The first interment was that of 10-year-old Catharine Kline, who died of tuberculosis and was buried on July 4, 1858. Isaiah Morris, a prominent businessman in the county, was the second person buried, on July 20,1858. The third burial, on Sept. 27, 1858, was that of an infant surnamed Thurston.

Also in these areas are a number of veteran’s graves, reflecting the significant military history that is present in Sugar Grove. Two of the cemetery’s most talked-about veterans are buried at opposite ends of Section 1. One is recognized for his fame, the other for his anonymity. 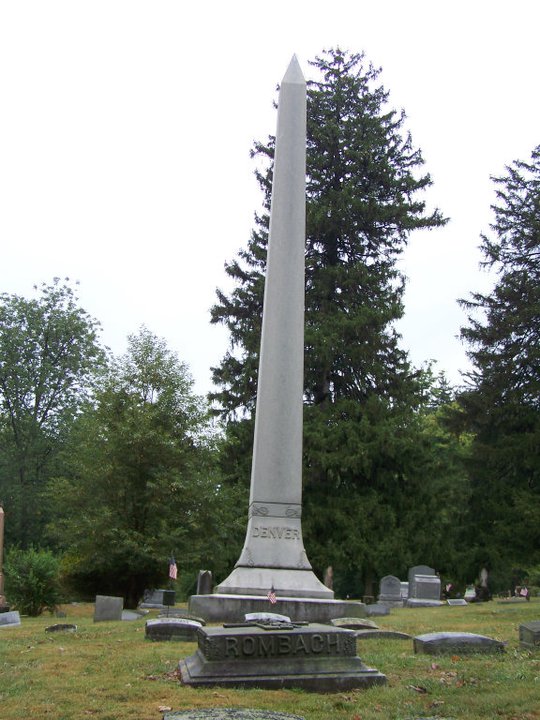 The tallest monument in the cemetery – said to be modeled after the Washington Monument – belongs to General James W. Denver, who served in the army both in the Civil War and Mexican War. After the Mexican War he went to California, where he was elected to the California State Senate, and later to the U.S. Congress. In 1857, Denver was named Governor of the Kansas Territory. Soon after the start of the Civil War, President Lincoln commissioned Denver as a brigadier general of the volunteer army. In the years following the war, Denver practiced law in Washington D.C. and Wilmington. The city of Denver, Colorado, is named after him.

In contrast is the story of the soldier who passed through Wilmington on a train in 1867, apparently making his way home after the Civil War. He became sick and died before he could give anyone his name and address, and was buried in Sugar Grove. His grave was unmarked until 1890, when the Grand Army of the Republic (GAR) started to provide headstones for Civil War veterans’ graves.His said simply: “Unknown Soldier.”

Though he came to Wilmington on his own, he isn’t alone now. Many other civil War vets are buried close by. Beside him is A.J. Atkinson, who enlisted at 18 and lost a leg in battle. Also next to him is Edward Payne Miles, who joined the army at 37, serving in the Ohio 61st Volunteer Infantry. A few feet away are the Callen brothers. On Sept. 29, 1864, Alfred, 16, and Napoleon, 17, both signed up for the 53rd Kentucky Volunteer Infantry. On Sept. 15, 1865, both were discharged. After the war they journeyed to Wilmington where their father, William, lived. 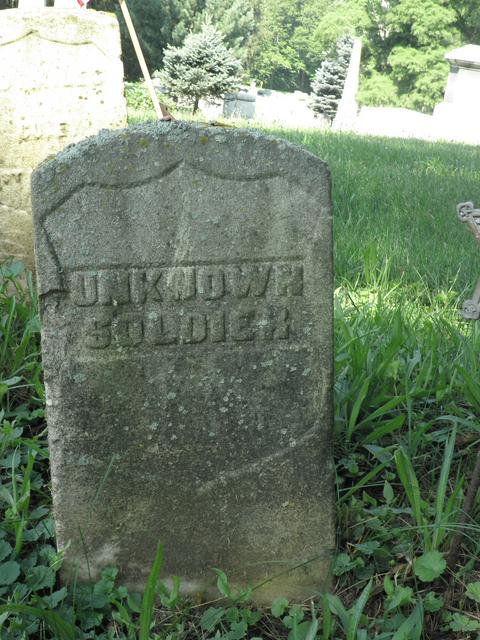 Also close to the Unknown Soldier is Soldier’s Point, the triangular section of some 60 graves that was set aside to honor Civil War veterans who had no other means for burial. In 1927 the GAR erected a Civil War Monument at the point,featuring a statue of a keen-eyed Union Soldier in a rumpled greatcoat, clasping a rifle, with a bayonet at his side and a cartridge box strapped to his chest.The monument is flanked on two sides by army cannons made in 1861. 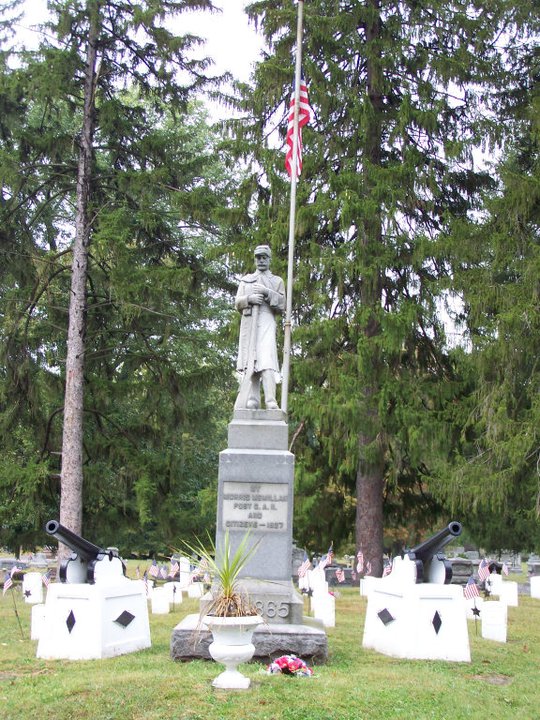 Among the graves at Soldier’s Point are a number of African-American troops, including the Mallory brothers, Milton and Alfred, who were 49 and 47 when they enlisted in the Colored Troops Heavy Artillery, Company G, out of Tennessee. Also buried in the area is Mary Taylor Adams, the first nurse from Ohio to volunteer for service in the Civil War. On April 13, 1861, 23-year-old Mary enlisted as a nurse in the Union army and served until the war ended. She was one of the first nurses to arrive at the area that became Camp Dennison, near Cincinnati, where she was stationed. When she got there, she found no buildings had been designated for the care of the wounded soldiers – just and empty barn. Mary cleaned the barn’s ground floor and covered it with hay and blankets to make bedding for the incoming wounded soldiers.

One of the loveliest sections of the cemetery is called the Grove, the shady incline directly behind the main office. It is here that two small, unpretentious headstones sit side by side, marking the graves of Leo and Anna Weltz. Leo died on Dec. 31, 1890 of kidney failure. In his obituary, the Wilmington Journal noted that “from his arrival in Wilmington until the day of his death,” Leo Weltz took more interest in Sugar Grove than anything else.”It is fitting,” the memorial continued,”that he should rest among the trees he had planted and among the slopes and drives he so tastefully planned.”