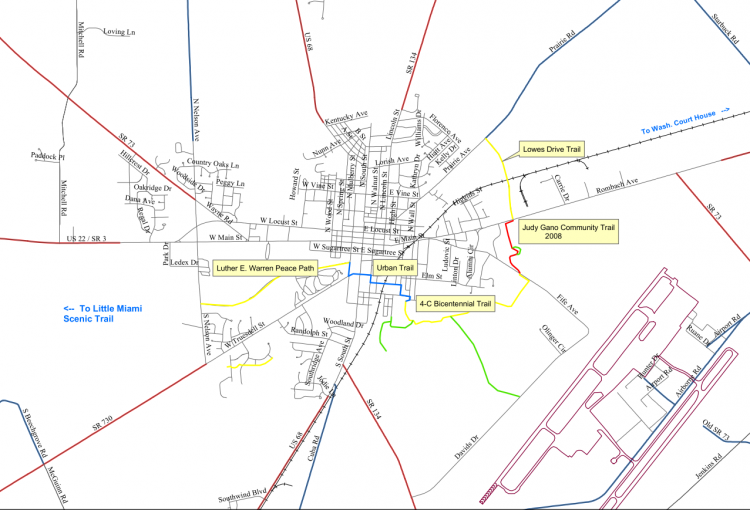 Enjoy a wooded canopy as you walk this beautiful trail, the first to be built in the City (in 1999).  The “Peace Path” as it is known locally crosses two bridges including a covered bridge built by Eagle Scout Jonah Hein and named after local naturalist Dr. Nathan Hale.  The second bridge was named after E.E. McKibben, a long-time trail advocate who was instrumental in building this trail.  It was resurfaced with the addition of handrails as the Eagle Scout service project of Micah Hein.  The Luther Warren Peace Path is almost completely level and accommodating to wheelchair, scooter or stroller users. 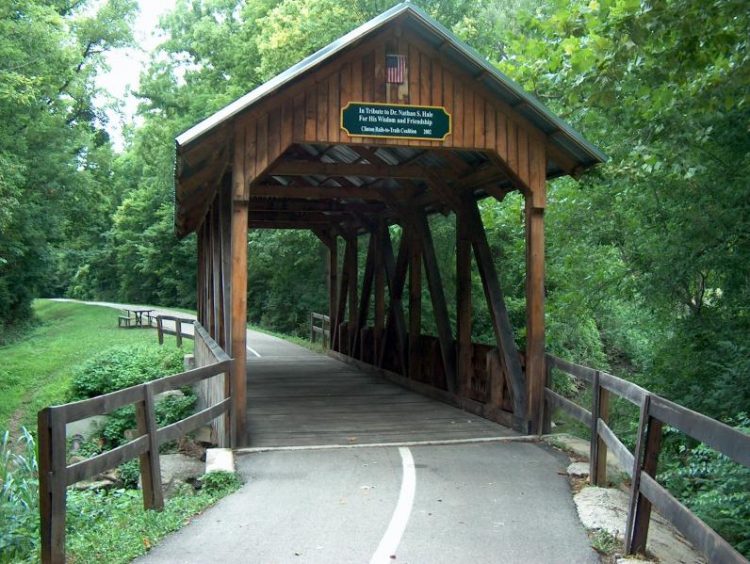 This trail has three access points – at Nelson Avenue on the west, at Mulberry Street on the east and from the south end of the Clinton Memorial Hospital parking lot (enter from 616 W. Main) via the Margery Hale Bridge, the Eagle Scout service project of Jeff Cousineau.  The Nelson Avenue trailhead is located near 397 S. Nelson Avenue and has parking for about six cars.  The Mulberry Street trailhead near 171 S. Mulberry Street has on-street parking.  It can also be accessed by foot from the historic Sugar Grove Cemetery which has property adjacent to the trail toward the east end.

To reach the 4-C Bicentennial Trail from the Mulberry street trailhead use the Urban Trail (signed route on city streets – see below for directions).

CCTC Comments:  This trail is fabulous and definitely peaceful.  In the summer, the tree cover makes it the “coolest” trail in town.  The trail is almost completely level — wonderful for wheelchairs, scooters and strollers. The bridge surfaces are wooden planks but can be crossed by wheelchairs, scooters and strollers.  The trail is close to downtown restaurants and B&Bs (turn north from the Mulberry Street trailhead and go two blocks to Main Street and Historic Downtown Wilmington). Restaurants within three blocks of the Mulberry Street trailhead – the historic General Denver Hotel, Jen’s Deli (inside Books ‘n More) and the Mediterranean Restaurant, all on Main Street. If you happen to be visiting someone at the hospital or work at the hospital, take a break with a walk on the trail. It is easily accessible from the south side of the CMH parking lot.  The hospital also has a cafeteria that serves healthy meals.  Finally, if you enjoy wildlife, deer and many birds can be seen from this trail.  The deer like to cross the Margery Hale Bridge from the hospital to Sugar Grove Cemetery. Lytle Creek can be viewed at several points from the trail.

The Urban Trail connects the Mulberry Street Trailhead of the Luther Warren Peace Path to the Southeast Neighborhood Park trailhead of the 4-C Bicentennial Trail.  From the Mulberry Street trailhead of the Peace Path, turn right onto Mulberry Street (south) to Truesdell/S.R.730 (go east/left) (go through signaled intersection at S.R. 68) to Charles Street (go south/right) to Hawley Avenue (go east/left), cross railroad tracks to Grant Street (go south/right) to Doan Street (T-stop – go east/left) to Wall Street (go south/right) and then to Marlena Drive (very short, curves to right) into Southeast Neighborhood Park where there is one 4-C Bicentennial Trail trailhead.  Sidewalks are available most, but not all of the way.  Reverse directions going the other way and follow the signs.  Take directions with you in case signage is missing.

CCTC Comments: The Urban Trail is functional.  It’s not pretty but at least it’s short, under a mile.  Its purpose is to get you from the Luther Warren Peace Path to the 4-C Bicentennial Trailhead at the Southeast Neighborhood Park. At this time, the only means of connecting the Peace Path and the 4-C Trail is via city streets.  While bicycle, skateboard and pedestrians will find it useful, it is not accommodating to wheelchair, scooter or stroller users.  There are no sidewalks on Hawley Avenue.  Always use extra caution when riding/walking on City streets.
Back to Top 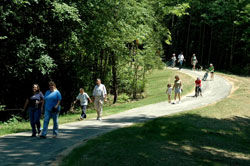 This trail was built as a partnership between the City, the County, Wilmington College and the Clinton County Trails Coalition.  Built in honor of the State’s Bicentennial (2003), it was laid out by trail advocate Lori Williams and designed by Clinton County Engineer Jeff Linkous.  It is wooded, gently rolling and has three bridges.  The westernmost bridge is the Boy Scout service project of Brice Carpenter. Another bridge, known as the “Farm Bridge”, was resurfaced with the addition of handrails as the Eagle Scout project of Chase Yeakley.  The west trailhead is at the Southeast Neighborhood Park with entrances/exits from Marlena Dr. and Paris Ave.   The eastern trailhead is on Fife Avenue next to the Clinton County Engineer’s office, 1326 Fife Ave. (across the street from David Williams Park).  Parking is available at both trailheads on city park property.  While scooter users regularly use this trail, wheelchair and scooter users are advised to use caution and discuss conditions with the City Parks Director (382-4781) due to the grade in a couple of places on the trail.

CCTC Comments:  Another fabulous trail, rolling and beautiful.  Often called simply the “4-C Trail,” this trail is becoming more popular each year since it opened in July 2004.  The adjacent Wilmington College farm property gives the trail a real “country in the city” feel.  The trail also passes near the College’s Hazard Arboretum. The YMCA parking lot can be reached by foot from the 4-C Trail via the College Arboretum.  The five-acre County Prairie is adjacent to the trail and marked by an informational kiosk and a bench.  The trail also passes by the County Engineer’s property.  Horseback riders occasionally use this trail.  Horse trailers should be parked at David Williams park and enter the trail at the Fife Ave. trailhead.  Horses are permitted on city streets, so it is possible to ride from David Williams park to Nelson Avenue (3.5 mile one way) by using the 4-C Trail, the Urban Trail (city streets, and the Luther Warren Peace Path.  The natural surface trails in the 127-acre Lytle Creek Nature Preserve can be accessed from the 4-C Trail (near the westernmost bridge), but these trailheads are not signed at this time.  Lytle Creek can be viewed from several points along the trail.  If you seek a bit of a thrill, anyone using wheels can build up speed on the two or three grades on this trail. Rating:  Mild thrills for some, lots of serenity for those who seek it. 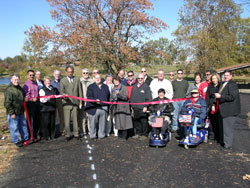 This trail was opened in 2008 and is named after community activist and attorney Judy Gano.  This trail connects the 4-C Bicentennial Trail with the sidewalk on Rombach Avenue, providing an important link to the Lowes Drive Trail and a future Citywide trails system.  Note the Indian Trails marker near the Castle Playground parking area, an Eagle Scout project of Cody Clifton.

CCTC Comments:  This trail is “small but mighty.”  Because of its location completely within J.W. Denver Williams Park, it is ideal for use by many people, but particularly families with young children.  It is short, paved and it connects some key family attractions in the park such as the Castle Playground (a project organized by Judy Gano), the duck pond, and another playground near the tennis courts.  Using this trail makes it easy to move from one playground to the other, via the duck pond bridge.

This trail is also key connector in the future Citywide trail system because it connects the 4-C Bicentennial Trail to Rombach Avenue and the trail alongside Lowes Drive.  With the completion of the Judy Gano Trail, it is now possible to enter the trail system from either Prairie Avenue or Nelson Avenue and travel approximately 4.3 miles to the other end, an 8.6 mile round trip.  Cyclists have been hoping for more mileage in the City trail system and this helps move toward that goal.  Persons living in neighborhoods along the Urban Trail no longer need a car to go to the grocery or to the shops and restaurants on Rombach Avenue.  Anyone desiring to use their car less should consider living near the Urban Trail or Southeast Neighborhood Park.  For those looking to add a little exercise to their night out for dinner, park at the Castle playground parking lot and walk to one of the restaurants along Rombach.  Have dessert because you will walk the calories off returning to your car!  Let the kids play before returning home!  This trail can add exercise to the family night out.  CCTC hopes that a short “Kroger connector” might be built near the tennis courts to make it easier to access the shops near the trail.  Thanks to the City for adding this short but important trail to the Citywide trail system.
Back to Top

Lowe’s Drive Trail (.7 mile, paved, 10 feet wide).
This trail is parallel to Lowe’s Drive and is a connector trail between  Rombach Avenue and Prairie Avenue.  At this time it does not connect to a sidewalk or trail at the north end.

CCTC Comments:  This trail is functional, an important connector between Rombach Avenue and the future Citywide trails system to on the east, north and west sides of town.   The best thing about this trail is that you can walk from Denver Williams Park to Generations Pizza, Staples or Lowe’s.  CCTC hopes that Denver addition and the neighborhoods along Prairie will soon be connected to this trail via a paved surface trail.  Many pedestrians walk on Prairie Avenue to reach this trail but they should use extreme caution when doing so as there is no shoulder on Prairie Avenue.

Dr. Nathan Hale Nature Trail (.5 mile).
This nature trail is in J.W. Denver Williams Park The trailhead is near the playground that is north of the duck pond and can be accessed from the Judy Gano trail.  The trailhead is marked with a sign.  Call the City Parks Office for more information (382-4781).
Back to Top

Lytle Creek Nature Preserve Trail (approx 1.5 mile of trail).
The Lytle Creek Nature Preserve has an unmarked trail going through it that can be accessed from the 4-C Bicentennial Trail near the westernmost bridge.  Natural surface, gently rolling, some wet areas. Not many improvements have been made to this park yet, so enjoy the woods with that in mind.  Call the City Parks Office for more information (382-4781).
Back to Top